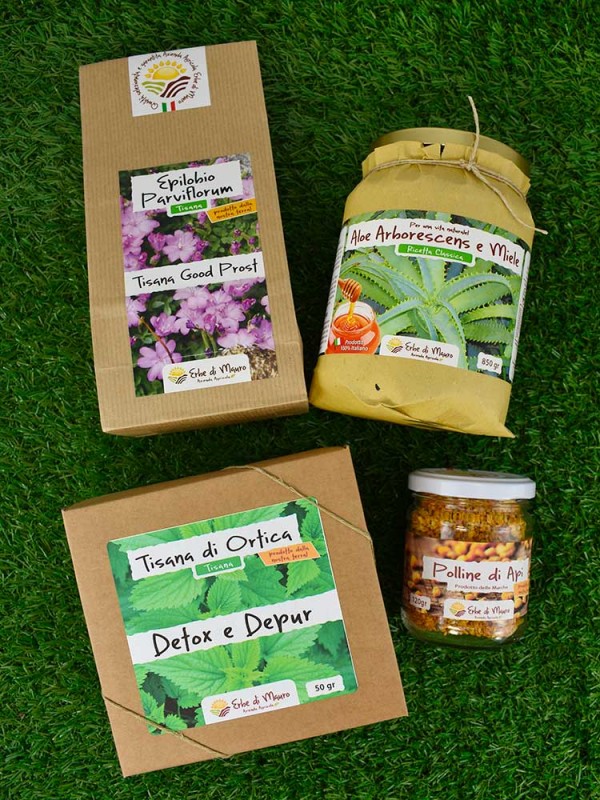 The Prostate Package is a set of natural remedies designed specifically for those with prostate problems (prostatitis, prostatic hypertrophy, etc.).

How to take the products:

Aloe juice : it should be taken 3 times a day, in the measure of a spoon, always half an hour before meals. For those who are just starting out, however, I recommend starting with a lower dosage, equivalent to a coffee spoon (instead of a large soup spoon). This is to avoid having strong reactions due to the purification of the body, such as diarrhea.

Bee Pollen : pollen should be taken on an empty stomach, for example before breakfast and in general half an hour before meals or 3-4 hours after. If you also take Aloe juice you can take it immediately afterwards. During the day it can be taken to the extent that varies from one to a maximum of 4 teaspoons per day and can be accompanied by a spoonful of honey, or dissolved in a warm drink (not hot, the heat would destroy many vitamins and nutrients).

Nettle herbal tea: nettle herbal tea is prepared in this way: a teaspoon of nettle, for a quantity of water equal to one cup. The herb is left to rest in boiling water for about 10 minutes, after which it is filtered and drunk. At least one cup a day is recommended, up to a maximum of three.

Father Romano Zago's recipe is the best solution to take fresh Aloe Arborescens, without the use of preservatives or processes, such as pasteurization, which alter the properties of Aloe.

The honey used in this recipe is of fundamental importance, both to properly maintain the mixture and to expand the properties of the Aloe. In fact, honey favors the diffusion of aloe in the body and keeps its properties unaltered.

How to take it : being a natural product and without laboratory alterations, it is necessary to pay attention only to the first administration. In some cases it is advisable to drink a little water immediately after taking aloe.

The product is made fresh and for better conservation it must be kept in the fridge or in a very cool environment or in the lower part of the fridge, do not expose the juice to intense light and do not remove the paper around the container. It is recommended to take the juice with a stainless steel or plastic spoon, do not drink directly from the bottle.

Directions for use : a teaspoon of dried herbs for a cup of water (250 ml). The herbs are placed in water (still cold) and heated until it boils. Then it turns off and left to soak for another 2 minutes. It is filtered and drunk (hot or cold). Two cups of Epilobio herbal tea a day are recommended.

Warnings : Do not exceed the recommended daily dose. Keep out of reach of children. Store in a cool, dry place.

Contraindications : At therapeutic doses Epilobium does not cause particular side effects, unless there is ascertained hypersensitivity to one or more active ingredients contained in the drug. As a precaution, the use of Epilobio is not recommended during gestation and lactation.

Description : Epilobium (Epilobium parviflorum), is widespread and abundant throughout central Europe. It is a 50-60 cm tall herbaceous plant with small pale violet flowers and grows on the banks of waterways, on moist and nutrient-rich soils. On our Alps it is found from the high plain to the medium altitudes. Leaves and flowers are used.

Several studies have been conducted on the epilobium which confirm its use in the urological field. The main active components of the aqueous extract (herbal tea), oenotenin B and dimeric-macrocyclic ellagitannin, are able to induce the Neutral Endopeptidase (NEP), capable in turn of reducing the proliferation of prostate cells.
In addition to an amtiproliferative action, the willow has been shown to have antibacterial properties, especially against E. Coli, anti-inflammatory and antioxidants.

As for the popular use of herbal tea, it is thanks to the experience handed down to us by Maria Treben , a famous Austrian herbalist and healer, that today we know the medicinal properties of this precious plant. Treben used flowers and leaves of the Epilobium to treat all of her patients with prostate or bladder diseases. Today in Spain, thanks to the botanist and farmer Josep Pàmies (cultivator of medicinal plants), the willow tree is experiencing a new golden age and many patients suffering from prostatitis and prostate cancer are successfully treating themselves using this plant and combining it with conventional treatments with excellent results.

Directions for use : a teaspoon of dried nettle for a cup of water (250 ml). Or 5 g of dried herb for a liter of water. Leave to infuse in boiling water for 10 minutes and then filter. Drink 2-3 cups a day. The association with horsetail is recommended in case of anemia, osteoporosis, brittle hair, teeth and nails. The association with epilobium is recommended in case of prostate and urinary tract diseases (prostatitis, prostatic hypertrophy, cystitis, etc.).

Warnings : Do not exceed the recommended daily dose. Keep out of reach of children. Store in a cool, dry place.

Contraindications : It is not recommended to use the plant during pregnancy as it stimulates the motility of the uterus. It should not be taken concomitantly with diuretic drugs as it already has diuretic properties and could cause a lowering of blood pressure.

Description : The nettle ( Urtica Dioica ) is a perennial plant, of the urticaceae family, very widespread in our territory. It grows spontaneously practically everywhere: in the fields, in uncultivated land, along the roadside, along rivers and we find it up to an altitude of about 2500 meters. The leaves and branches are covered with stinging hairs, saturated with formic acid (yes, the one present in ants) which in contact with the skin creates a stinging reaction. This stinging action, however, is canceled with the cooking, even short, of the leaves and branches.

The large amount of known active ingredients, and others still not thoroughly studied together, make nettle one of the plants with the greatest number of medicinal properties. The leaves contain abundant chlorophyll, the green dye of the plant world (whose chemical composition is very similar to that of hemoglobin that dyes our blood red) which gives the plant a strong anti-anemic property. It is used against anemia caused by lack of iron or by blood loss, because the iron and folic acid contained in it stimulate the production of red blood cells.

The plant also has vasoconstrictor (contracts blood vessels) and haemostatic (stops bleeding) properties, so it is especially used in cases of nasal and uterine hemorrhages. It is also very useful for women who suffer from heavy menstruation.

Nettle is also recommended in case of convalescence, malnutrition and exhaustion, because the leaves are very rich in mineral salts, especially silicon, which stimulates the immune system, phosphorus, magnesium, calcium, manganese and potassium; and vitamins A, C and K, which make it remineralizing, restorative and invigorating.

It also has a purifying, diuretic and alkalizing action: it is indicated in case of gout, rheumatic affections, arthritis, hyperglycemia and cystitis; and in general, when it is necessary to produce a detoxifying action.

Nettle has a great ability to alkalize the blood and facilitate the elimination of acid residues of metabolism, which are closely linked to all these diseases.

Good results are obtained from its use in disorders of the organs of the digestive system, thanks to its digestive activity, because it contains small amounts of cretin, a hormone produced by some cells of our intestine, which stimulates the secretion of pancreatic juice and the motility of the stomach and gallbladder: nettle thus facilitates digestion and improves the ability to assimilate food.

Thanks to the presence of tannins it also has astringent properties and is therefore used successfully to stop diarrhea, in case of colitis or dysentery.

Finally, nettle has a galactogenic action, due to the ability to increase the secretion of breast milk, and therefore it is recommended during breastfeeding.

Directions for use : pollen should be taken on an empty stomach, for example before breakfast and in general half an hour before meals or 3-4 hours after. It can be taken in quantities ranging from one to a maximum of 4 teaspoons a day and can be accompanied by a spoonful of honey, or dissolved in a warm drink (not hot, the heat would destroy many vitamins and nutrients).

Warnings : keep out of reach of children, do not exceed the maximum recommended dose.

Description : Pollen derives its name from the Latin pollen, meaning fine flour. In fact, it appears as a powder of variable color (yellow-red). Pollen is made up of microscopic structures to which plants entrust the transport of their germ cells. The bees collect it and use it for the production of royal jelly, and for feeding the larvae.

Bee pollen is the richest and most complete source of minerals, vitamins, enzymes and amino acids found in nature. Here's what it contains:

The nutritional complex from which it is made makes pollen a natural supplement useful for solving and preventing numerous health problems. It is mainly used in these cases: