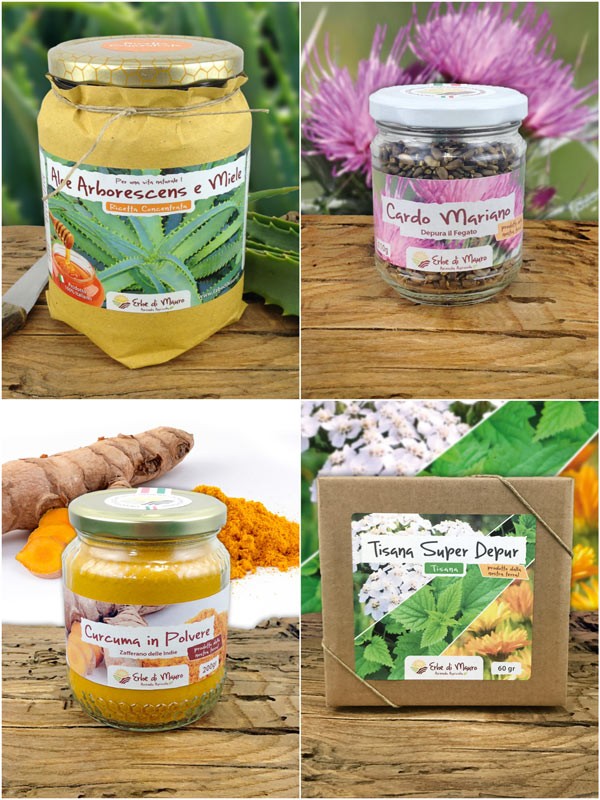 How to take the products

Aloe juice: should be taken 3 times a day, in the measure of a spoon, always half an hour before meals. For those who are starting out, however, I recommend starting with a smaller dosage, equivalent to a coffee spoon (instead of a large soup bowl). This is to avoid having strong reactions due to the purification of the body, such as diarrhea.

Turmeric: it is a spice that can be used in addition to any dish (soups, raw salads, risotto, minestrone, fish, meat, etc.). To ensure maximum absorption of the active ingredient (curcumin), it is advisable to combine turmeric with a pinch of pepper and a little extra virgin olive oil. The advice is to use it daily, in the measure of a teaspoon a day, or at most two.

Milk thistle: a decoction is prepared with milk thistle seeds. Take a teaspoon of milk thistle seeds and a cup of water (250 ml). The water is added to the saucepan and the seeds and left on moderate heat until it reaches the boiling temperature, after which it is boiled for at least 5 minutes. Then it switches off and is left to rest for 10 minutes. Finally we filter and drink. At least one cup a day should be drunk, preferably two, or three.

Super Depur herbal tea: it is a mixture of nettle, calendula and yarrow millefeuille. It is prepared as a normal herbal tea, adding a teaspoon of this herbal tea to a cup full of boiling water. Leave to rest for 10 minutes and then filter. Recommended one herbal tea a day, better two.

This Aloe juice is in a concentrated version (i.e. with more Aloe) and contains: Aloe Arborescens 50%, Honey 49%, Alcohol 1%

How to take the juice : being a natural product and without laboratory alterations, attention should be paid only to the first administration. In some cases it is recommended to drink some water immediately after taking aloe.

The product is made fresh and for greater conservation it must be kept in the fridge or in a very cool environment or in the lower part of the fridge, do not expose the juice to intense light and do not remove the paper around the container. It is recommended to take the juice with a stainless steel or plastic spoon, do not drink directly from the bottle.

Directions for use : the best way to use turmeric powder is by combining it with a little pepper. Pepper ensures maximum absorption of curcumin, a powerful antioxidant with a strong anti-tumor action. Fats, such as olive oil, also improve the absorption of curcumin. So the advice is to use it raw in association with pepper and vegetable oil to season your dishes. Turmeric is clearly more powerful if consumed together with cruciferous vegetables (broccoli, cabbage, cauliflower, brussels sprouts, etc.), vegetables with strong antioxidant and anticancer properties.

Warnings : it is recommended not to exceed the dose of 2 teaspoons per day. Keep out of reach of children. Store in a cool dry place.

Contraindications : Excessive doses of turmeric can cause nausea or gastric acidity. Interactions with hypoglycaemic, anticoagulant and immunosuppressive drugs are also possible, therefore those who take this type of drugs should limit the consumption of this spice. Finally, it is not recommended in pregnancy, breastfeeding and in children under 2 years of age.

Description : Turmeric powder is obtained by drying the rhizome of the Curcuma Longa plant, a perennial herb plant native to southern Asia, india and indonesia. It is also known with the name of Indian saffron and is widely used in Indian and Middle Eastern cuisine. This spice has been used for over 5,000 years in Ayurvedic medicine as a general, digestive, anti-inflammatory, against dysentery, arthritis and liver disorders. The clinical studies carried out in these years on this spice and on its most interesting active ingredient, curcumin, have confirmed many of the properties attributed to it by ancient popular wisdom. Furthermore, interesting discoveries have been made about anticancer properties turmeric, capable of preventing and contrasting the onset of cancer cells and limiting the spread of metastases.

Directions for use : a decoction is prepared with milk thistle seeds. Take a teaspoon of milk thistle seeds and a cup of water (250 ml). The water is added to the saucepan and the seeds and left on moderate heat until it reaches the boiling temperature, after which it is boiled for at least 5 minutes. Then it switches off and is left to rest for 10 minutes. Finally we filter and drink. Drink 2-3 cups of milk thistle decoction a day. For a liter of water about 5-6 g of seeds are used (maximum recommended dose)

Warnings : Do not exceed the recommended daily dose. Keep out of reach of children. Store in a cool dry place.

Contraindications : Milk thistle is generally well tolerated and no important contraindications for use are known to date. Adverse effects are rare, mild and gastrointestinal in nature. Hypertension patients, however, should not take it because thistle also contains tyramine, a molecule that stimulates the secretion of dopamine, adrenaline and norepinephrine and, therefore, increases blood pressure.

Description : Milk thistle (Silybum marianum) is a herbaceous plant belonging to the Asteraceae family. It grows spontaneously throughout the Mediterranean maquis, that is, the characteristic vegetation of all those lands that overlook the Mediterranean Sea.

It consists of a rose of thorny leaves. The flowers, which reach maturity in the summer, are purple-red in color, while the fruits are oblong bright achenes of a bright black color, stained with yellow. The seeds are the part used in herbal medicine and are mainly used to treat all liver diseases.

Milk thistle seeds contain silymarin: it is a set of molecules called flavolignans, concentrated in the outer protein layer of the seed. The main components of silymarins are silybin, also called silybinin, isosiline, silycristin and silydianine.

Silibinin is the flavoglycan component, most active in the treatment of degenerative liver diseases, such as cirrhosis, hepatitis C or liver pain caused by alcohol or drug abuse.

Silymarin and its hepatoprotective properties have long been known by more traditional folk medicine. The hepatoprotective action of thistle has been confirmed by numerous scientific studies and is mainly due to the activity of silymarin as an inhibitor of peroxidation of fats, as a regulator of cell permeability and, more generally, as an inhibitor of the formation of metabolites responsible for liver damage .

It also has galactogenic properties: it stimulates the production of breast milk in puerperas, because it contains a large amount of bioflavonoid complexes (phytoestrogens) called flavonolignans. These phytoestrogens regulate female hormonal production, whose balance is fundamental for the general well-being of the woman.

Directions for use : Infusion. Take a teaspoon (about 2 grams) of herbal tea and a cup of water (250 ml). Bring the water to a boil, then turn off and pour the herbal tea, leaving it to rest for 10 minutes. Then it is filtered and drunk immediately hot, or later cold.

Warnings : Keep out of the reach of children. Store in a cool dry place.

Contraindications : For pregnant or lactating women, before use ask your doctor for advice. Avoid taking it in case of ascertained hypersensitivity to one or more components of the herbal tea.

Description : Herbal tea based on nettle, calendula and yarrow millefeuille. It can be useful as a natural remedy for purifying the body. This herbal tea was very often recommended by a famous herbalist of the '900, Maria Treben, and today by Spanish herbalist pharmacist Josep Pamies, to help the body heal from an impressive number of diseases, including cancer.