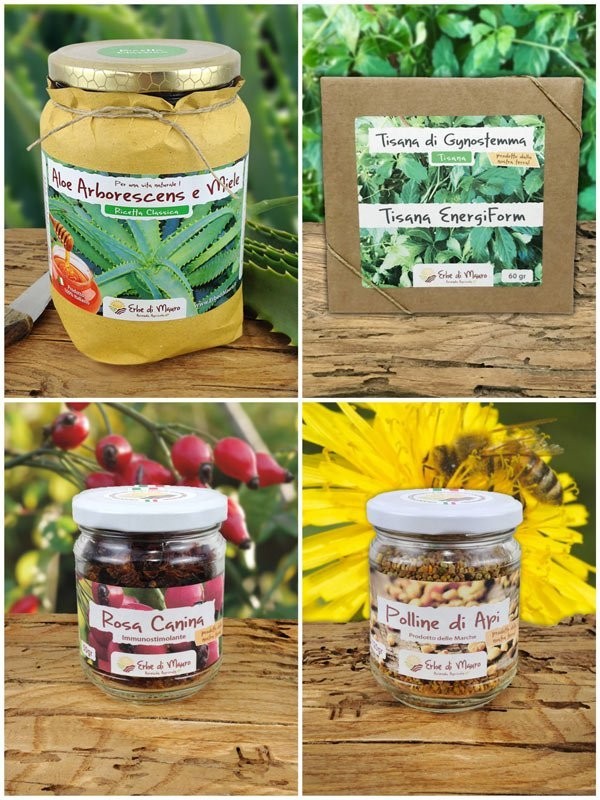 The Immune Defense Package is specially designed for people with weakened immune defenses, who tend to get sick very easily.

This package contains the following products:

HOW TO TAKE PRODUCTS:

Aloe juice: should be taken 3 times a day, in the measure of a spoon, always half an hour before meals. For those who are starting out, however, I recommend starting with a lower dosage, equivalent to a coffee spoon (instead of a large soup bowl). This is to avoid having strong reactions due to the purification of the organism, such as diarrhea.

Bee pollen: pollen should be taken on an empty stomach, for example before breakfast and generally half an hour before meals or 3-4 hours after. If you also take Aloe juice you can take it immediately after. During the day it can be taken to the extent that varies from one to a maximum of 4 teaspoons a day and can be accompanied by a spoonful of honey, or dissolved in a warm drink (not hot, the heat would destroy many vitamins and nutrients).

Rosehip berries: They are taken in the form of herbal tea, prepared in this way: a teaspoon of rosehip berries on a cup of water (250 ml). Bring the water to a boil, then turn it off and add the rosehips, leaving to stand for 10 minutes. Then we filter and drink. Drink at least one cup a day, preferably 2. For a liter of water, about 5 g of dog rose are used (maximum recommended dose).

Gynostemma herbal tea: dried Gynostemma leaves are used to prepare an infusion. The dosages are: a teaspoon of Gynostemma, for a quantity of water equal to one cup. The grass is left to rest in boiling water for about 10 minutes, after which it is filtered and drunk. Drink at least one cup a day, up to a maximum of 3.

The juice made following the Father Zago's recipe is the best solution to take the fresh Aloe Arborescens, without using preservatives or processing that alter the properties of Aloe. The honey used in this recipe is of fundamental importance, both to correctly maintain the compound as well as to strengthen the properties of the aloe as honey promotes the spread of the aloe in the body and maintains its properties unaltered.

This Aloe Arborescens juice is not a medicine but a 100% natural juice for the well-being. Being a natural product and without laboratory alterations, attention should be paid only to its first administration. In some cases, it is suggested to drink some water immediately after taking aloe.

Gynostemma pentaphyllum, also called jiaogulan, is a perennial herb with a climbing habit, of the family Cucurbitaceae.

It grows spontaneously in south-east China, on Mount Fanjing, in a cool-humid climate. In China, the innumerable beneficial properties of this plant were already known at the time of the Ming dynasty (1300 BC), indeed, in ancient Chinese medical texts it is referred as "the grass of immortality" or eternal life.

Even nowadays, in traditional Chinese medicine, where medical herbs are commonly used, the Gynostemma herbal tea is used to stimulate the immune system, to strengthen the memory, to fight tiredness, to improve the functionality of the liver and digestion, as well as for many other disorders and diseases.

Infusion. Pour a teaspoon of dried Gynostemma leaves in a cup of boiling water. Leave to infuse for 10 minutes, then filter and drink immediately hot, or later cold.

Do not exceed the recommended daily dose. Keep out of reach of children. Store in a cool and dry place.

Rose Hip is a spontaneous species belonging to the Rosaceae family, very common throughout Italy.

Flowers and berries are used in this plant. Rich in vitamin C, minerals and substances with anti-inflammatory and antioxidant activity, Rose Hip berries have always been used in traditional medicine to stimulate the immune system.

Infusion. Use a teaspoon of Rose Hip berries per cup of water. Bring the water to a boil, then turn off and pour over the Rose Hip berries, make it steep for 10 minutes. Strain off the herbs and serve. Recommended to drink from 2 to 4 cups a day.

The name pollen derives from the Latin “pollen”, or flour flower.

In fact it appears as a powder of variable color (yellow-red). Pollen is made up of microscopic components to which plants entrust the transport of their germ cells.

Bees collect pollen and use it to produce royal jelly and to feed the larvae. In traditional medicine it is used for its very high concentration of vitamins, minerals, proteins and carbohydrates.

For this reason bee pollen has always been used in case of fatigue and physical or mental deterioration, stress, anemia and low immune defenses.

Take one to four teaspoons a day, preferably on an empty stomach. It can be dissolved in warm (not boiling) water, or it can be taken with honey.

Keep out of reach of children. Store in a cool and dry place. It is contraindicated for people allergic to pollen.