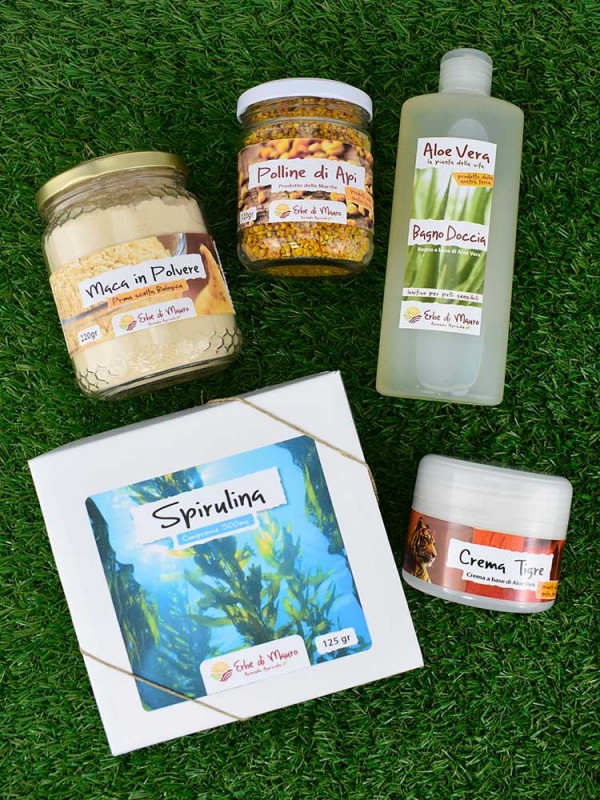 This package is designed for those who do sports, with the best natural supplements, bath products and tiger cream with balsamic action, essential to warm up the muscles and soothe the pains due to barrel and contractures.

This product is no longer in stock

The bee pollen is loaded with a concentrate of nutrients and it has been used worldwide for centuries as a tonic in case of fatigue, anemia, physical and mental decay, stress, low immunitary defenses and as a sport supplement.

The name pollen derives from the Latin “pollen”, or flour flower.

In fact it appears as a powder of variable color (yellow-red). Pollen is made up of microscopic components to which plants entrust the transport of their germ cells.

Bees collect pollen and use it to produce royal jelly and to feed the larvae. In traditional medicine it is used for its very high concentration of vitamins, minerals, proteins and carbohydrates.

For this reason bee pollen has always been used in case of fatigue and physical or mental deterioration, stress, anemia and low immune defenses.

Take one to four teaspoons a day, preferably on an empty stomach. It can be dissolved in warm (not boiling) water, or it can be taken with honey.

Keep out of reach of children. Store in a cool and dry place. It is contraindicated for people allergic to pollen.

NEW FORMULA! Aloe Vera and citrus bath shower, for all skin types. Suitable for frequent washing, for sensitive skin (even children), for dehydrated and / or normal skin. It gives a natural hydration and hygiene to the whole skin of the body. With lemon and orange essence.

We recommend our Aloe Vera body wash with citrus essential oils (lemon, sweet orange and bitter orange) to the whole family and is also suitable for young children. It is good for daily use and is suitable for all skin types, even the most sensitive.

We recommend it for:

* Raw material cultivated and processed by our company .

It does not contain:

Our Aloe Vera body wash can be used regularly, for taking a shower, or bathing, even more than once a day. It is good for cleaning the whole body, even for intimate areas.

Apply the shower gel on the skin in a gentle way and let it rest for a while, then rinse. It can also be used as a shampoo.

It has an anti-inflammatory and balsamic action on the skin and muscles. Useful for:

The tiger cream has an anti-inflammatory and balsamic, soothing, healing and regenerating action on the skin and muscles.

There are many ways to use this cream.

Apply in the affected areas with a tonic massage several times a day.

Do not apply on eyes and do not swallow. Keep out of reach of children.

Containing camphor, this cream is not recommended for pregnant and breastfeeding women.

The maca plant is a tuber that grows in the Andes of Peru at above 3,700 m altitude. In these extreme places, characterized by considerable temperature variations between day and night, this plant has developed characteristics that make it able to get the maximum nutrients from the soil, including substances that are essential for our body.

The main edible part of the plant is the root, that is in fact rich in essential amino acids (10.2%), mineral salts (including calcium, iron, selenium, iodine, potassium, copper and zinc), vitamins (vitamin E, vitamin A, vitamin C and especially vitamins group B), carbohydrates, fatty acids and fibers.

1. To fight infertility and impotence (both for men and women)

For its invigorating and aphrodisiac effects, maca is also known as the viagra of the Andes or Peruvian viagra. In addition to improving sexual desire, maca acts in men favoring an increase in the number and quality of spermatozoa. In women it acts as a stimulant of the maturation of the follicles of Graff and of the enlargement in the endometrium.

Maca is also considered an excellent natural supplement for sportsmen. This is due to the rich quantity of essential amino acids, which also provide anabolic properties, stimulating the metabolism, enhancing the increase in muscle mass.

Maca is also a valid aid for all women who have an irregular or particularly painful period: it reduces pre-menstrual syndrome, reduces menstrual pain and regulates the period.

Maca, similarly to ginseng, can increase the body's ability to adapt to stressful agents of various kinds (physical, mental, work, sport, pathological, etc.), avoiding the damage that may arise from these conditions without causing important side effects.

The maca looks like a yellow powder with a slightly sweet taste. You can take it every day in the amount ranging from one teaspoon to a tablespoon a day (the latter is the recommended dosage for those who practice sport).

It can be taken dissolved in a glass of water or vegetable milk or together with other drinks (preferably not hot), or mixed together with fruit and vegetable smoothies, or yogurt perhaps even adding dried fruit and a little honey, to make it even more delicious.

For a more marked action, the combination with bee pollen is excellent.

Store in a cool and dry place, away from direct sunlight and sources of heat. Keep out of the reach of children.

Its use is not recommended for pregnant and breastfeeding women.

Spirulina is an algae loaded with a unique set of nutrients ad antioxidants. The nutrients present in the spirulina are so many that, even if taken alone together with water, spirulina can guarantee all the essential substances that are needed for the survival of the human being.

Package: Cardboard box containing a 125g Spirulina package in a stand-up closed bag, not transparent to protect the product from UVA rays, with press- zipper to open/close.

Spirulina is a type of green algae that grows spontaneously in particular sweet lakes with alkaline waters, present in certain tropical areas of the planet, such as Lake Texcoco in the Mexican plateau and Lake Chad, located in central-northern Africa. The Aztecs made great use of it for millennia as a food supplement. The Westerners discovered it for the first time about 500 years ago, when the Spanish conquerors, after landing in Central America, saw the Aztec natives spreading thickly woven nets on the surface of the lake, and then pulled up a greenish mush. This pulp, which was in fact spirulina, was then dried in the sun and subsequently used to make bread with high nourishing power.

Spirulina is the number one superfood par excellence, as it is one of the very few foods that alone, together with water, can guarantee to the human being all the nutrients he needs for survival. It is no coincidence that we speak of spirulina as the "food of the future", or the food that alone will be able to defeat hunger in the world. As a matter of fact, it is one of the main foods used by astronauts, because at equal weight there is no other dried food that can contain such a high concentration of nutrients, all highly bioavailable.

Below you can find a list of its main properties and uses:

Thanks to its high amount of nutrients (proteins, carbohydrates, mineral salts, vitamins, etc.) spirulina is considered a food supplement par excellence, able to perfectly compensate for possible nutritional deficiencies due to malnutrition, or special diets (for example vegetarian and vegan).

Thanks to its very high concentration of proteins (60-65%, three times higher than in meat) highly bioavailable, the presence of all the essential amino acids and the high concentration of vitamins and minerals, spirulina is the perfect choice for all those sportsmen who want to supplement their diet, but in a natural and healthy way, without assuming synthetic products. Moreover, being a wonderful alkalizing agent, spirulina has an anti-acid effect on the tissues, which facilitates a faster recovery after and during the sport activity.

Spirulina has a concentration of antioxidants that very few other foods can feature. In particular: carotenoids, vitamin C, chlorophyll, phycocyanine and selenium, all substances that are found in abundance in spirulina, are all antioxidants very useful to counteract the harmful action of free radicals, improving the prevention against many diseases of degenerative nature, including Cancer.

Taking spirulina regularly ensures an improved immune response to bacterial, fungal and viral infections. Some laboratory studies have shown that spirulina has a strong antiviral action, especially against the influenza virus and the herpes labial virus, as well as measles and mumps. Furthermore, spirulina protects the T lymphocytes and promotes the production of antibodies and improves the function of glands and organs of the body linked to the production of white blood cells, such as bone marrow, spleen and lymph nodes.

It certainly does not make miracles, but spirulina can be of great help in losing weight. Thanks to its nutritional complexity and the presence of numerous minerals, vitamins and enzymes, spirulina is able to speed up the metabolism of our body and facilitates the elimination of fat deposits. In addition, spirulina contains phenylalanine, a substance that acts on the nervous system and in particular on the area that affects appetite, inducing a sense of satiety. Spirulina inflicts a control action on blood glucose levels and glycemic changes, which is in fact one of the main causes of body fat accumulation.

6. It is strongly alkalizing

Spirulina is a powerful alkalizing agent, which helps to counteract gastric hyperacidity and even tissue acidification. For this same reason, it is also considered an anti-cancer food, because, as we have seen in recent studies, acidity and tumors go hand in hand.

The fatty acids contained in the spirulina, especially those belonging to the category of omega 3, act on the proteins that carry cholesterol from the liver to the secondary districts through the blood circulation. By inhibiting the action of these proteins, essential fatty acids facilitate a reduction in the concentration of cholesterol in the blood.

Spirulina is able to eliminate many heavy metals harmful to our body. In particular it has an effect on mercury, lead, cadmium and many chlorinated hydrocarbons often found in pesticides and insecticides.

Spirulina is very rich in calcium (a concentration 26 times higher than that present in cow's milk), so it is very useful for preventing and fighting osteoporosis and for stimulating the formation of bones, cartilages and teeth in children during growth.

10. Effective against anemia and fatigue

The high concentration of iron (34 times higher than in spinach), chlorophyll and vitamin B12 makes spirulina a great ally for all people suffering from anemia. Because of the incredible richness of these and many other nutrients that we have already listed, spirulina is also perfect for those who often suffer from fatigue and psycho-physical exhaustion.

11. For healthy skin, nails and hair

It is very simple to take spirulina in tablets, in this solution you do not feel the typical seaweed taste, unpleasant to many people. The intake, like any other tablet, should be accompanied by a generous sip of natural water at room temperature (not boiling and not frozen).

Who can take it? Spirulina can be taken at any age, either by children, adults or the elderly, and can be taken safely even by pregnant and breastfeeding women.

Recommended doses: 4 to 16 tablets a day to be taken two or more times a day.

The maximum dose (8g equivalent to 16 tablets, it is recommended for those who do a lot of sport).

Keep in a dry place, away from direct sunlight and sources of heat. Keep out of the reach of children.

All toxicological studies confirm that Spirulina does not show any toxicity or any side effect if taken in the right dosages. In case of overdose it may give symptoms such as nausea, vomiting, or diarrhea.