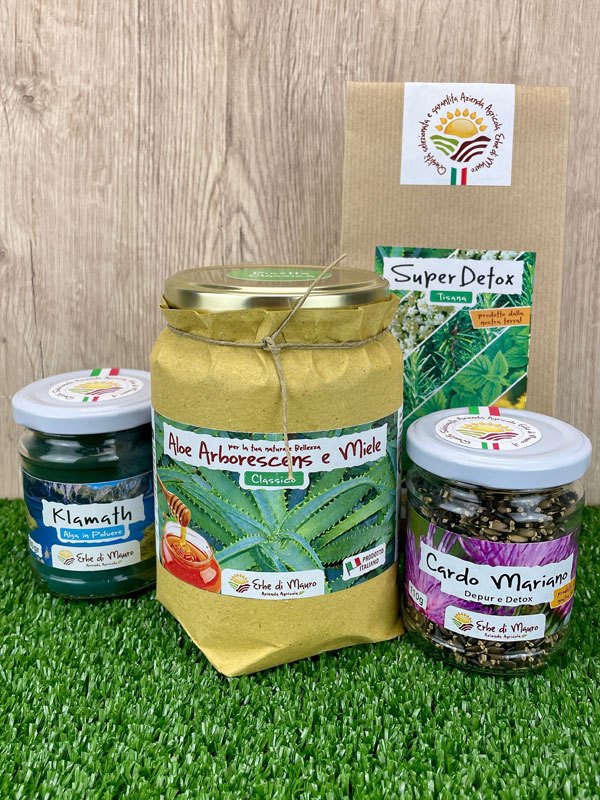 All the products you need to detoxify your body.

Milk thistle seeds are used in traditional medicine as a natural remedy for various liver disorders. This is thanks to the presence of silymarin, a substance with a known hepatoprotective power.

The seeds of milk thistle contain silymarin: it is a set of molecules called Flavolignans, concentrated in the outer protein layer of the seed.

Numerous scientific studies have highlighted the hepatoprotective action of this substance. In fact, milk thistle is used in traditional medicine as a natural remedy for all disorders of the liver.

Decoction. Pour the herbs in the cold water and bring your water to a boil. Once the water has reached boiling temperature, reduce the heat as low as possible and cover; simmer at least for 5 minutes. Finally remove from heat and strain off the herbs and serve.

Do not exceed the recommended daily dose. Keep out of reach of children. Store in a cool and dry place.

Aloe Arborescens and honey, inspired by the famous recipe of the brazilian friar.

This product is inspired by the famous recipe of the friar and is composed of:

A mix of plants with a marked purifying action. Your liver will thank you!

The Super Detox herbal tea is a blend of aromatic and officinal herbs specially studied to purify your body. It's composed by:

We recommend this herbal tea to all people with liver problems and to all those who have the goal to detoxify, after a period of food strains.

Infusion. Take a teaspoon of herbal tea and a cup of water (250 ml). Bring the water to a boil, then turn off and pour the herbal tea, letting it rest for 10 minutes. Then filter and drink hot or warm.

Klamath is the only edible microalgae that grows wild and is collected directly from the lake in which it grows, Upper Klamath Lake in Oregon (USA). It is a microalga with a unique nutritional profile, far superior to that of the most famous Spirulina.

The Klamath microalgae ( Aphanizomenon flos aquae ) is part of the large family of green-blue microalgae, the first form of life on the planet and the basis of the entire food chain and the same which also includes the most famous Spirulina.

However the Spirulina that you find on the market today comes entirely from artificial crops in the tank, while the Klamath is the only edible microalgae to grow wild in an almost uncontaminated volcanic environment: Lake Klamath in Oregon (USA) .

Lake Klamath is nestled in the Cascade Mountains Park, a protected natural area surrounded by volcanic mountains that since time immemorial have been pouring volcanic materials into Lake Klamath whose bottom, enriched by a huge amount of bioavailable volcanic minerals, can even go up to 10 m high. Microalgae absorb these precious minerals from the water, reaching the full spectrum of minerals and trace elements necessary for the human organism in a synergistic and perfectly assimilable form.

Three hundred days of sunshine a year guarantee algae great opportunities for photosynthesis; while, cold winters push them to produce a large amount of Omega 3 fatty acids (absent in Spirulina).

For the uniqueness of the environment in which it develops, these microalgae

One of the main characteristics of the Klamath microalgae, is that it is a perfectly assimilable food not only for the balanced and balanced synergy of all its nutrients, but also for its cell membrane, formed by a lipoglycoprotein similar to human glycogen,
that our organism assimilates instantly, as a source of immediate energy.

Property of the Klamath

With over 100 macro and micronutrients, Klamath is basically the most complete and most nutritious food on the planet . There is no other seaweed, plant, mushroom, fruit or other food comparable to Klamath.

Its intake is therefore always useful to fill possible gaps, deriving from an unbalanced diet or simply from the fact that the foods we eat today, are no longer as nutritious as they once were.

These are some of the known benefits of taking Klamath.

Klamath contains numerous pigments and substances with antioxidant properties , in particular it has a very high content of carotenoids , including important quantities of canthaxanthin (the most powerful carotene, together with Astaxanthin) and small quantities of astaxanthin, zeaxanthin, lutein and lycopene. It contains alpha-phycocyanins , blue pigments with a very high antioxidant power which act as an effective scavenger of peroxide free radicals, inhibit liver lipoperoxidation and perform an important anti-inflammatory action. Finally, Klamath is the major naturally occurring source of chlorophyll (with a concentration of up to 2%, against 0.3% of wheat grass), also a powerful antioxidant.

Klamath is extremely rich in alpha-phycocyanins , whose anti-inflammatory properties have been highlighted by numerous studies. To these must be added the important presence of Omega-3 and its ability to increase its organic levels, to reduce the plasma levels of arachidonic acid, precursor of the main prostaglandins and inflammatory leukotrienes.

The alpha-phycocyanins contained in Klamath is a natural compound effective against asthma . It also inhibits the production of molecules responsible for inflammation, limiting the amount of these molecules released and thus limiting their effects during allergic events.

Klamath has been shown to perform a powerful and all-encompassing action on the immune system .

About 1.5 g of Klamath are able, in addition to producing the mobilization of B and T lymphocytes from the lymph nodes, to mobilize 40% of the NK lymphocytes, the main immune agents, from blood to organs and tissues, within 2 hours from intake and for 4-6 hours, at the same time increasing its power of action. Klamath also contains various polysaccharides that stimulate the activity of macrophages, 12 times more than the lipopolysaccharides normally used as immunostimulants and specific low molecular weight peptides responsible for the aforementioned ability to migrate NK lymphocytes.

However, there is no risk of immune hyperstimulation, because on the contrary Klamath moderates the immune components responsible for inflammation, reducing the production of free radicals by neutrophils.

The alpha-phycocyanins contained in Klamath perform a significant hepatoprotective action ;

The Klamath microalga has the incredible ability to stimulate the migration of stem cells and therefore increases the reparative power of the body in case of physical injuries, intoxication, overload and infectious diseases.

Klamath contains phenylethylamine (PEA), also known as the love molecule, as our body produces a lot of it when we are in love. PEA is a general neuromodulator, because it is able to activate or even alternatively inhibit various neurotransmitters, dopamine but also under certain conditions serotonin. This allows it to perform a revitalizing and balancing action on the nervous system, counteracting depression but, if necessary, also anxiety; promoting energy through its activation of adrenaline, but also sleep and rest through the activation of serotonin and the hypothalamic-pituitary axis.

The Klamath microalga contains vanadium , a trace mineral that has proved essential for the metabolism of insulin and therefore important as a nutritional factor to counteract the metabolic syndrome that underlies obesity, diabetes and cardiovascular diseases. It is a very rare mineral of which Klamath is particularly rich and to which a useful amount of chromium is added , which has similar insulin-mimetic properties.

9. Natural supplement, useful for everyone

Klamath is particularly rich in noble proteins (between 65 and 70% of its weight), about three times as much as meat. In qualitative terms they are complete proteins, containing all the essential and non-essential amino acids . It also contains the full spectrum of naturally occurring vitamins and minerals. Basically a total supplement in all respects, useful both for athletes and for people with malnutrition problems.

Other recognized properties of Klamath :

We recommend mixing a teaspoon of powdered Klamath with a little water or other (not hot) drinks , such as fruit juice, smoothies, yogurt, or vegetable milk.

Who can hire you? Klamath can be taken at any age, whether by children, adults or the elderly, and can also be taken safely by pregnant and breastfeeding women.

Recommended doses: 1 to 3 teaspoons per day.

Keep the Klamath powder in a dry place, away from direct sunlight and heat sources. Keep out of reach of children.

All toxicological studies confirm that Klamath does not exhibit any toxicity or side effects if taken in the right dosages. In case of overdose it can give symptoms such as stomach pain, nausea, vomiting, or diarrhea.