Hello, I am Mauro Vallesi, the owner of Erbedimauro farm.
Today I would like to tell you my personal story and how I decided to start this job.

How it all started 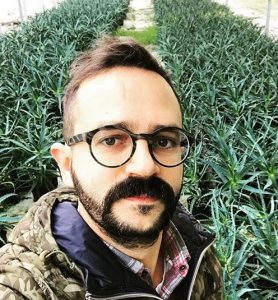 In 2008 I began my new adventure as a cultivator of Aloe and officinal herbs...

At the time I was about 28 years old, but despite my young age, I had been suffering from various health problems for years. I had thyroid disorders, hypertension, stress, frequent headaches and intense cervical pains.

I have never been a big fan of medicine and I did not like at all the idea of starting taking drugs for non-serious problems. For this reason, I decided to take another path. I began to get interested and to study on the internet and on books, looking for a natural way to solve my problems.

It was then that I discovered the properties of Aloe and the recipe of Father Romano Zago. After reading in one breath his book, titled " Aloe isn’t a medicine, and yet… it cures!”, and later the book “Cancer can be cured!” - this last book is the most famous - I decided to immediately test the properties of the recipe. At that time I wandered far and wide to find Aloe plants, they were not yet so widespread and it was difficult to get the first plant.

During this period I ran into a gentleman, a friend of my father-in-law, with serious prostate disorders (he had to undertake surgery), who managed to solve his issues by regularly taking the preparation of Father Zago. My father-in-law himself started taking the juice too, resolving serious intestinal disorders and hemorrhoids.

Thanks to them, I became aware of a group of nuns from the Marche region, who had been growing Aloe plants for several years and preparing a mixture juice with Aloe Arborescens leaves, honey and a little grappa (a traditional Italian spirit), just as suggested by Father Romano Zago in his book. They welcomed me immediately, helped me growing the first plants and taught me how to preserve them.

I bought the juice from the nuns and I started taking it every day, for a period of about 2-3 months. After the first few weeks I was already feeling much better. My gut was back to normal, I no longer had insomnia, I felt stronger and the pain in my neck was totally gone. A month later I did a blood check, which confirmed that my thyroid was functioning correctly again. The values were all normal and with immense pleasure I greeted the doctor who never saw me again.

Few days and months later, many friends, relatives and acquaintances, that came to know about my story, began to ask me persistently the Aloe juice to solve their own issues. Following, the same also occurred on Facebook, when talking in some groups, I shared my experience. In the end I managed to convince also my mother (it was really hard) with rheumatoid arthritis to start taking the aloe juice. Aloe worked with her too! As a matter of fact she no longer takes medicine, while she regularly takes the preparation of Father Zago.

When passion becomes a profession 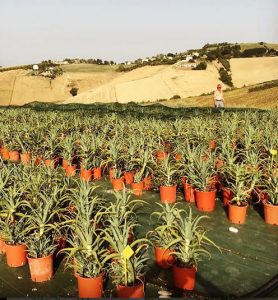 After this positive experience, Aloe became part of my daily life until it became a real job. At that moment I decided my future: I would dedicate myself, body and soul, to the cultivation of this plant and to spread my knowledge. Although I was lucky enough to be the grandson of a farmer, my parents were not.

Nevertheless, my parents inherited a beautiful piece of land in the hills, which my father started to cultivate as a hobby farm. Initially, it was not so easy to grow aloe.

Only few people could help me in the farm, especially considering the hilly field-yet very suitable to the cultivation of the aloe- it was still very difficult to work because of the slope of the land, the climate, and the exposure to the cold wind. After a few years of cultivation experience, I was able to greatly increase the cultivation in a simple and natural way.

Today, after almost 10 years, my farm boasts the largest organic cultivation of Aloe Vera and Aloe Arborescens of the Marche region and especially the first plantation made in the hills, that means it features healthier air, cleaner earth, less contaminated waters. We are also one of the very few Italian companies specialized in the production of fresh Aloe juice (unpasteurized and without preservatives).

I want to stress again that the juice is freshly made after receiving the purchase order, meticulously following all the indications of Father Zago.

Over the years we have also expanded our range of products. We started the cultivation in our fields of new medicinal plants, some autochthonous (such as calendula, elicriso, thyme, sage, mallow, etc.), others originating from other countries, but which can also well adapt to the Marche region climate (such as turmeric, kalanchoe, stevia and many others).

Working in the fields and in the green is my biggest passion.

Often if you try to reach me, I am in the fields, for this reason I hope you can be patient and I will get back to you soon.

I like taking care of my plants and cultivating them respecting the soil and the environment. This is why I do not use chemical products, at the cost of working a little more to remove weeds and of obtaining only natural products (like the compost I make from the pruning waste). Furthermore, finding out that, by using my products, people manage to solve many of their health problems, makes me feel full of joy and repays me for all the hard work.